PRAGUE (Reuters) - Czech political leaders were meeting on Friday to try to form a new government, but analysts said they expected the current crisis to lead to early elections. Senior figures from the three parties of the outgoing coalition were meeting

from 1315 GMT to discuss the shape of a new cabinet after Prime Minister Vaclav Klaus presented his government`s resignation last weekend over a funding scandal. It was not clear which parties would join any new government. With deep cracks in the coalition, many analysts believe a new government could only have a caretaker role ahead of fresh polls - which could still be months away. A Reuters poll of 11 economists focused on the Czech markets showed eight believed there would be an early election after a caretaker government. Klaus said on Thursday his Civic Democratic Party (ODS), the biggest party in the coalition and in parliament, was willing to discuss the new government but that he wanted his party eventually to go into opposition. A senior party official said on Friday that any decision on whether the ODS would go into opposition would depend on a special party congress on December 13. "A definitive decision about all this can only be made at the ODS congress," party deputy chairman Miroslav Macek told a news conference. President Václav Havel was due to meet the leader of the main opposition Social Democrats, Milos Zeman (1500 GMT), to discuss whether the party, which has been pressing for early polls, could support a caretaker government. With the ODS deeply split over Klaus`s fall, the two junior coalition partners, the Christian Democrats (KDU-CSL) and pro-business Civic Democratic Alliance (ODA), said on Thursday they were willing to propose forming a caretaker cabinet between them. Another possibility is a government headed by a non-partisan figure, an option favoured initially by Havel, or consisting entirely of experts without party affiliation. Havel said on Thursday he might name someone to lead talks on forming a government, though not a prime minister, early next week. Havel is due to meet Klaus at the presidential residence, west of Prague, on Saturday. Among candidates mentioned to head a caretaker government are Jan Švejnar, the head of the graduate economics school at the Czech Academy of Sciences, and central bank governor Josef Tošovský. A Social Democrat proposal to have parliament postpone the second reading of the 1998 budget was defeated but final approval in the third reading is not expected before next week. The coalition had just 100 seats in the 200-seat parliament but two deputies have since quit the pro-business Civic Democratic Alliance. 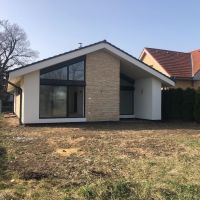